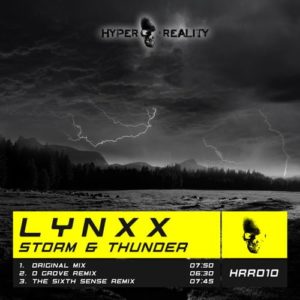 OUT NOW!!! SUPPORT THE HARD TRANCE REVOLUTION AND GET YOUR COPY!

Most of you already know this German Hard Trance DJ & producer. He is part of the Hyper Reality crew from the beginning. With ‘Outlaw‘ and ‘Steam Hammer‘ he already released 2 tracks on our label and was also guest in the Hyper Reality Radio show for 2 times. After his free release ‘Steam Hammer‘ (still available on SoundCloud), LYNXX is back with another original track.

Can you hear the Storm & Thunder?

The first remix is done by Darren Grove from Swansea, better known as D Grove is a known man in the Harddance scene. As dj D Grove’s sets are guaranteed to fill the dance floor and get you stomp your feet with so much energy. After he went on to play a series of events in and around Swansea he pretty soon was asked to play at both Bionic and Breathe in Swansea and played alongside S.H.O.K.K, Trance Generators, Uberdruck, Mark E.G, Cally and Juice and The Organ Donors to name a few.

He co run a successful Hard Dance event in Swansea Called Dirtbox and is running the same named label.

We are glad to announce he has made a very energetic acid laden remix of Storm & Thunder which will shake the ground for sure.

And the 2nd remix is made by The Sixth Sense!
After his awesome “Vengeance” release, The Sixth Sense is back with a great classic sounding remix of LYNXX‘s Storm & Thunder.